These are random musings of my life journey, the people, animals, places, and events which have woven, and continue to weave, a tapestry that is me. We all know there is no real destination, only the ongoing experiences which blend together, creating the trail. Each step gives a glimpse of what is to come, without allowing me to see the end result. It is exciting. I have a home base that is mine, that gives me a place to rest. This is it. This is where my heart is, no matter where I journey...................

The story of Ginger 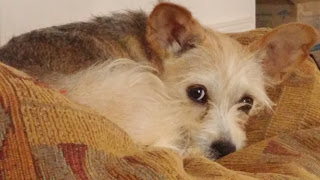 When I began to look for another little girl to be a playmate for LolaBella, now that her buddy Jewel (Jewelli, I called her, like "Julie")was too sick to play, I was surprised when I found her face within a few days of deciding that I had to do this for both my girls. LolaBella needed a playmate very much. She didn't understand why Jewelli wasn't playing with her any more. She tried, then looked so sad when Jewelli didn't follow her and run and wrestle anymore. And Jewelli desperately needed to be able to rest without being poked and pulled by LolaBella.

So, anyway, this little face popped up at my favorite rescue, one that I trust because of their treatment and ethics for the lives of their little charges. One look, and I knew she belonged. I made the call, and after a few bumps in timing, we got it worked out.

I was relieved when they offered to meet me almost halfway, because the drive is longer than I can do in one day by myself now. If they had not done that, it would have meant two days going and two days returning. I couldn't do that. Bless them for their help!

Her background story......
She was reported to have been found in an alley by a young woman with a small child. She took this little pup home and named her "Alli," reflecting her origin. After a time, the young woman had financial problems and needed to return to her mother's home for a while to get back on her feet. The woman's mother had some tiny Chihuahuas, and she was afraid that Alli would hurt one of them. She wouldn't allow her to come to the house. I can understand her concern, because this dog is bursting with energy! I will come back to that point later. Apparently, the younger woman was heartbroken about it, but she didn't see a choice, so she relinquished Alli for adoption.

So Alli was at the rescue only a few days. Then I brought her home. And why is she named "Ginger," not "Alli"?  Well, as I was driving home, she was curled up in the seat beside me, nervous, I'm sure, but also very tired because she had been spayed in those few days and was still recovering. As we drove, then spent a night in a hotel once I was too tired to make it home, I talked and talked to her. And strangely, she didn't particularly respond to the name "Alli." Oh, she would look at me, but she didn't "spark." So I said to her, "Is "Alli" not the right name for you?" and she cocked her head at me. So I started saying all kinds of names that I thought might suit her. I probably ran through 12-14 names, but nothing seems right to me and she didn't react in particular, either. I said, "Well, you're a spicy little thing from what I hear. Hmmm. Is your name "Ginger?" With this, her ears perked up, her eyes opened wide and her tail wagged. So I kept trying "Alli" and "Ginger" and a couple others, and she chose Ginger every time. Ginger she was!! 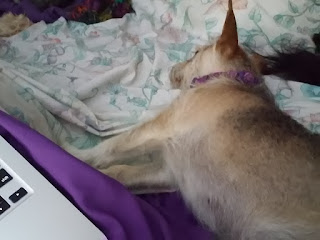 Once we were home and she met the others, everything went smoothly. Of course, she was mobbed while they got acquainted, but within minutes, everyone was OK. Her adjustment was good. In the first few days, she dived under the covers of the bed and staked her claim to sleeping between my ankles for a short time. After a few nights of this, she came out and has been my sidekick ever since.  And :sidekick" is literally correct. She wants to be right beside me when we all go to bed. Winter is coming, and she will be my back-warmer, I'm quite sure!

Ginger has no fear! Well, very little. She has more energy than any ten pound dog should! She's only about 1-2 years old, and she acts like most toddlers do....run, run, jump, race, tear across the couch, run, jump off the bed, run, jump off the back steps, run again! Oh, Mom's home! Jump up on her, bounce off her thigh(OUCH!!), race the others into the house, jump on Mom again! She is very rambunctious. I now understand why the older woman was worried about her fragile Chihuahuas. BUT........Ginger is very smart and she learns quickly. I have to correct her just once, or occasionally twice, and she is trained. The jumping on Mom? It's over. She still jumps or bounces AROUND me, but she does not jump ON me. And she doesn't run into or over her older sibling-pups. She is incredibly active, but doesn't run willy-nilly. As I said, she does insist on sleeping glued to me in the bed, but after all, she DOES rule the world! Or at least our house! 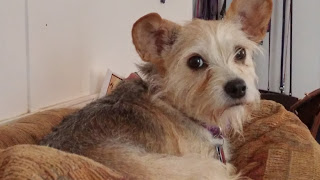 Ginger has fallen perfectly into her prescribed role. She and LolaBella are absolutely best buds. The chase each other and wrestle a lot. Interestingly, their play has inspired a couple of the older kids to play with them a little also. That's good for everyone. She sometimes gets a little bossy with the others, but a simple "No," and she sits down and it is over. Their personalities are so different, very opposite, to be sure. Lola is shy, timid, but when they play she gets just as rough as Gin. And Ginger is often the submissive one in their play. So interesting!


She is a real blessing. She is a sweetheart. She is full of love and shows it often. She brings a bunch of life and happiness in the house She completes our family, for sure.

If you have something to say about it, just stick out your thumb, and I'll slow down so you can hop aboard! But hang on, 'cause I'm movin' on down the road!!! No time to waste!!!

Lead me from death to life, from falsehood to truth.
Lead me from despair to hope, from fear to trust.
...Lead me from hate to love, from war to peace.
Let peace fill our lives, our world, our universe.
Peace, peace, peace.

About Me and My Journey

Lynilu
I’m living alone for the first time in my life and learning about a world that I am finding amazing and enchanting. Well, most of the time! Life has its ups and downs, but I love that the ups are now far more frequent. I like that I’m been truly in charge of my life, making choices based on my own wants and needs, enjoying this time to the max. What life has taught me to date is invaluable; what is ahead of me is exciting and alluring; but today . . . today is the best thing in my life, and I hope I’ll always live every today with a vengeance for happiness!! Come along with me!

Follow me on the other part of my journey ....

Hitchhikers and stories they tell

All I really need is love, but a little chocolate now and then doesn't hurt!" --Charles M. Schulz